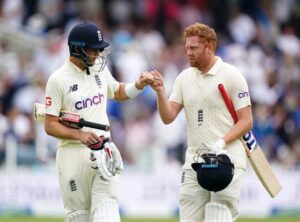 England defeated India by seven wickets in the rescheduled 5th Test match at Edgbaston in Birmingham on Tuesday. An unbeaten stand of 269 runs between Joe Root and Jonny Bairtsow for the fourth wicket helped the hosts chase down a 378-run target in the fourth innings. This is their highest successful chase in the final innings of a Test match. While Root remained unbeaten on 142, Bairstow scored 114 not out.

The hosts, who resumed their innings at the score of 259 for 3 on Tuesday, got home quite comfortably as Root and Bairstow tore apart the Indian bowlers to score quick runs for England. A day before, England had got a target of 378 runs to win the match after India were dismissed for 245 in their second innings.

With the victory in the rescheduled fifth Test, England end the five-match series against India 2-2.