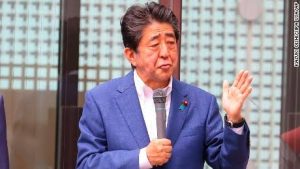 Shinzo Abe, the former Prime Minister of Japan, died after being shot twice in the city of Nara on Friday morning. Shinzo Abe had showed “no vital signs” after being taken to hospital, official said earlier. He was reportedly shot twice by unidentified attacker while the former Japanese prime minister was delivering a campaign speech.

Shinzo Abe had collapsed after bleeding due to the gunshot being fired at him. He was rushed to hospital in an “unconscious” state. A man, who is believed to be the suspect, has been detained.