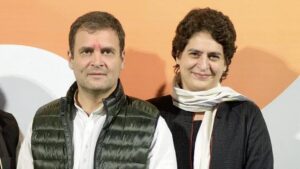 Congress leaders, including Rahul Gandhi, Priyanka Gandhi and Shashi Tharoor, were detained while marching to Rashtrapati Bhavan to mark their protest against inflation, price rise, GST and unemployment on Friday.
The Delhi Police has imposed Section 144 of the CrPC in the New Delhi district except for Jantar Mantar ahead of the Congress party’s call for nationwide protests against inflation and unemployment.
The party has decided to stage a pan-India protest on Friday and hold a demonstration outside the residences of Prime Minister Narendra Modi and President Droupadi Murmu, however, it was denied by the Delhi Police.