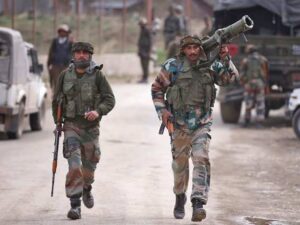 The Indian Army on Thursday foiled a suicide attack on an Indian Army base here in which both the terrorists were killed while three Army troops lost their lives.
One officer and two jawans are also injured in the attack and have been shifted to medical facilities for further treatment, Army officials said here.
“In a terrorist attack 25 km from Rajouri, two terrorists carried out a suicide attack on an Army company operating base. Both terrorists have been killed while three own troops have lost their lives. Operations in progress,” Indian Army officials said.
“One Officer along with two other jawans is injured in the terrorist attack and has been rushed for medical treatment,” the sources said.
16 Corps Commander Lt Gen Manjinder Singh is constantly monitoring the situation on the ground.
The area is being sanitised, they added.
The suicide attack on the company operating base of a Rashtriya Rifles unit in Pargal located in Darhal area of Rajouri, looks like an attempt to carry out an Uri-like attack where terrorists had infiltrated in the Army camp and killed 19 soldiers.
The attempt to infiltrate the Army camp took place days ahead of the 75th Independence Day celebration in the country.
Notably, the attack comes a day after three LeT terrorists were neutralised by security forces in Budgam.
One of the killed terrorists was involved in the killing of civilians Rahul Bhat and Amreen Bhat.
“All the three hiding LeT terrorists neutralised. Bodies being retrieved from the site, identification is yet to be ascertained. Incriminating materials, arms & ammunition were recovered. A big success for us,” said a tweet by Additional Director General of Police (ADGP) Kashmir.