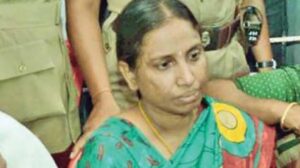 A convict in the Rajiv Gandhi assassination case has moved the Supreme Court seeking premature release.
S. Nalini, a convict in the Rajiv Gandhi assassination, has moved the apex court challenging the Madras High Court order, which dismissed her plea saying that it cannot exercise powers under Article 142 of the Constitution to pass a similar order, which was passed by the apex court to release another accused, A.G. Perarivalan, in the case. “The directions sought by the petitioner cannot be given by the court, as it otherwise does not have power similar to what the apex court has under Article 142 of the Constitution of India. For the foregoing reasons, the writ petition is dismissed as not maintainable”, said the high court in an order passed on June 17.
On May 18, the Supreme Court invoked its extraordinary powers to do complete justice under Article 142 of the Constitution, as it ordered the release of A.G. Perarivalan, sentenced to life in the assassination of former Prime Minister Rajiv Gandhi.
A bench comprising Justices L. Nageswara Rao (retired now), B. R. Gavai, and A. S. Bopanna said: “in the exceptional facts and circumstances of this case, in exercise of our power under Article 142 of the Constitution, we direct that the Appellant is deemed to have served the sentence in connection with crimea.. The Appellant, who is on bail, is set at liberty forthwith”. Perarivalan is currently on bail. His death sentence was commuted to life sentence and terrorism charges were withdrawn.