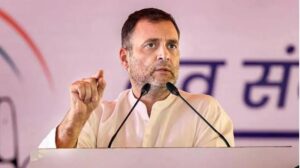 As the countdown began for the election of Congress president, Rajasthan Chief Minister Ashok Gehlot on Monday said the party is ”unanimously” in favour of Rahul Gandhi for the post.
The party’s election authority has said it will stick to the schedule of electing a new chief by September 20. Gehlot said that considering the sentiments of Congress workers across the country, Rahul Gandhi should accept the role.
“If Rahul Gandhi does not become the party president, it will be a disappointment for the Congressmen in the country. Many people will sit at home and we will suffer. He (Rahul Gandhi) should accept this post by himself, understanding the sentiments of the common Congress people in the country,” Gehlot told reporters here.
The chief minister said even within the party, there is an opinion in favour of making Rahul Gandhi the it. It is not about Gandhi or non-Gandhi family. It is the work of the organisation and no one is becoming a prime minister,” he said.