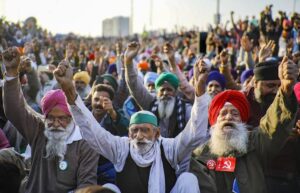 Thousands of farmers from various states gathered at the Jantar Mantar here on Monday to take part in a ”mahapanchayat” called by a farmers’ body, causing massive traffic snarls in Delhi, especially at the city’s borders, including Singhu and Ghazipur.
As the farmers associated with different unions reached Delhi, police put up layers of barricades at all the entry points of the city and checked every vehicle entering the national capital, which led to huge traffic jams.
Other than Punjab, Haryana and Uttar Pradesh, farmers from states such as Karnataka, Maharashtra, Odisha and Kerala arrived in Delhi to take part in the ”mahapanchayat” that was called demanding a legislation on the minimum support price (MSP) for crops, farm loan waiver and on other issues.