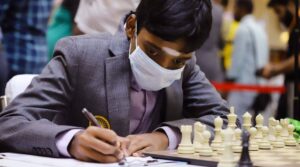 Teenaged Indian Grandmaster R Praggnanandhaa went down to Poland’s Jan-Krzystof Duda via the tie-break in the sixth round of the FTX Crypto Cup, the American finale of Champions Chess Tour, here on Sunday.It was the second loss for the 17-year-old GM after he went down to Quang Liem Le in the previous round. He, however, remained in the second spot with 13 match points behind world No.1 Magnus Carlsen (15 match points).Duda drew first blood when he won the opening game. After two draws, Praggnanandhaa won the fourth game to level the match. The Polish player then showed his class to win both the tie-break games for a 4-2 victory.Praggnanandhaa takes on Carlsen in the last and final round of the tournament later on Sunday night.Carlsen had to bring out his best to subdue the highly-rated Alireza Firouzja 3.5-2.5 via the tie-breaker. The Norwegian lost the first game but bounced back to win the next to level of the match. Games three and four were drawn before the world champion won the blitz tie-break series.In other matches in the round, Liem Le pulled off a surprise 2.5-1.5 win over Anish Giri of the Netherlands, and Levon Aronian defeated Hans Niemann 2.5-1.5.The eight-player all-play-all tournament is the American finale of Champions Chess Tour. There is USD 7,500 at stake for each match win at the event.Each match will be played over four rapid games, with blitz tie-breaks in case of a 2-2 draw.