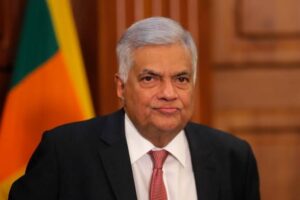 Sri Lankan President Ranil Wickremesinghe said that negotiation with the IMF on a bailout package has reached the final stage as he presented an interim budget in Parliament, aimed at boosting revenue and providing relief to people hit hard by the island nation’s worst economic crisis in decades.
President Wickremesinghe, who is also the finance minister of the cash-strapped country, told Parliament that the interim budget will lay the foundation for changing the economic design which existed in the country so far.
The talks with the International Monetary Fund (IMF) on a bailout package have been successful and reached the final stage, Wickremesinghe said, adding that once talks are completed he will brief Parliament on the way forward.
”Discussions on debt restructuring will be held with the main countries that provide loan assistance to our country. The United Nations in collaboration with leading international organisations, is launching a programme to ensure food security,” he said.
An IMF team is currently in Sri Lanka to discuss the bailout programme, which could be the antidote for the country’s current economic travails.