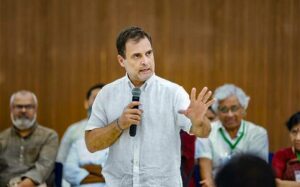 Former Congress president Rahul Gandhi on Friday said the country faces ”bankruptcy of vision” for what its future should be and claimed that his party was against creation of monopolies and wanted fairness.
”India now faces a bankruptcy of vision for what the future of our country should be,” he said on Twitter.
”We are for corporate India. We are against the idea of massive monopolies. We are against unfairness, be it against farmers or MSMEs. We will act to ensure fairness prevails,” he also said.
The former Congress chief has hit out at the ruling Bharatiya Janata Party (BJP) for ”not giving a vision” to the country and accused it of promoting hatred and divisiveness among people. He has also accused the BJP of working for the interests of only a few big businessmen.