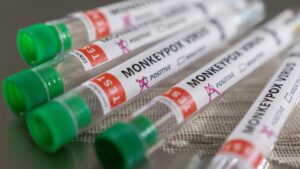 Washington : The Los Angeles County authorities in the US were looking into a second probable monkeypox-related death, media reports said.According to NBC News, Chief Medical Director Rita Singhal of the county’s Public Health Department said details were unavailable at this early stage of the investigation.”This is one of two deaths in the US that are under investigation to determine whether monkeypox was a contributing cause,” she was quoted as saying last week. On Monday, the department released a statement that provided some context regarding the death.”The resident was severely immunocompromised and had been hospitalised,” it said.Recently, the Texas Department of State Health Services reported that a person diagnosed with monkeypox in the Houston area had died. He was described in a statement as “severely immunocompromised”. The unnamed adult, who was being treated in Harris County, had “various severe illnesses” beside the virus, officials said earlier.