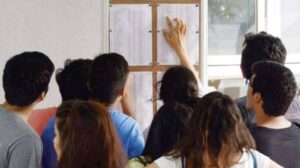 The results for the debut edition of the Common University Entrance Test for undergraduate admissions were declared on Friday, National Testing Agency officials said. The CUET-UG results were scheduled to be declared by 10 pm on Thursday. However, the NTA said post-midnight that there will be a delay citing a huge database.
”The merit lists will be prepared by participating universities, who will decide about their individual counselling on the basis of the CUET-UG score card,” said Sadhana Parashar, senior director (exams), NTA.
The first edition of CUET-UG, the gateway for undergraduate admissions in all central universities, began in July and concluded on August 30. Sixty per cent attendance was recorded in the exam.
According to Parashar, the performance of every candidate was evaluated using the ”equi-percentile method”. Under this method, normalised marks of every candidate were calculated using the percentiles of each group of students in a given session across multiple days for the same subject.
”For several subjects, CUET-UG was conducted in different shifts. Since the question papers for any subject in different shifts are different and it is quite possible that despite all best possible efforts to maintain equivalence among various question papers, the difficulty level of these question papers administered in different sessions may not be the same or similar,” she said.