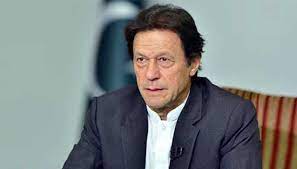 Pakistan Tehreek-e-Insaf chief Imran Khan on Sunday said that a revolution is knocking at Pakistan’s doorstep and a passage should be created for political stability by organising early elections, local media reported.This comes after the PTI chief held a meeting with the members of the Punjab cabinet in which they exchanged political and administrative matters of the province, ARY News reported.During the meeting, former Chief Minister Usman Buzdar, Punjab Assembly Speaker Sibtain Khan and other participants of the parliamentary party took stock of the prevailing political scene with particular reference to the province, devastation caused by floods, relief and rehabilitation of flood victims besides other matters.The meeting also witnessed a discussion on the need to further strengthen the coordination among the coalition partners in addition to greater interaction and cooperation among the ruling party members in the province.Besides, the PTI chief also congratulated provincial cabinet members for grabbing an outstanding victory in the Punjab by-polls.He said that PTI’s victory in the Punjab by-polls exhibited the nation’s confidence. Khan asked the Punjab cabinet and parliamentary party to firmly stand with the nation with the narrative of real independence, ARY News reported.”Nation is with us and we have to go ahead for elections soon. The early election is not the requirement of the PTI but inevitable for the betterment of the country,” he added.Presidents and general secretaries of important districts of PTI, including Bahawalpur, Faisalabad and Jhelum, held important meetings with Imran during which organisational matters and other important issues were discussed in detail.