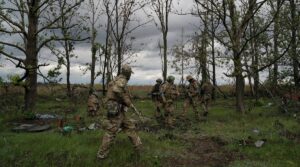 Estonia, Latvia, and Lithuania closed their borders on Monday to most Russian citizens in response to the wide domestic support in Russia for the war in Ukraine.Under the coordinated travel ban, Russians wishing to travel to the Baltic countries and to Poland as tourists or for business, sports or cultural purposes will not be allowed in even if they hold valid visas for the European Union’s checks-free Schengen Area.The prime ministers of the three Baltic nations and of Poland agreed earlier this month to stop admitting Russian citizens, saying the move would protect the security of the European Union member countries neighbouring Russia.“Russia is an unpredictable and aggressive state. Three-quarters of its citizens support the war. It is unacceptable that people who support the war can freely travel around the world, into Lithuania, the EU,” Lithuanian Interior Minister Agne Bilotaite said Monday.“Such support for hostilities can pose threats to the security of our country and the EU as a whole,” she added.The ban includes exceptions for humanitarian reasons, family members of EU citizens, Russian dissidents, serving diplomats, transportation employees and Russians with residence permits or long-stay national visas from the 26 Schengen countries.There were no indications of new travel restrictions on Monday for Russians seeking to enter Poland, even though the country agreed with the Baltic countries to introduce the ban by September 19.Poland, which borders Russia’s Kaliningrad exclave, still has tight restrictions on Russian travelers remaining in place from the COVID-19 pandemic.