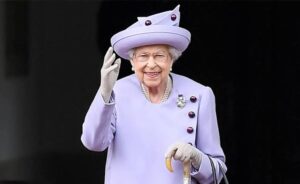 Britain’s longest-serving monarch Queen Elizabeth II’s funeral has begun at the Westminster Abbey in London. King Charles and other senior British royals followed Queen Elizabeth’s coffin into Westminster Abbey on Monday, joining world leaders and monarchs to bid farewell to a beloved figure who unified the nation through her 70-year reign. In scenes of inimitable pageantry, pall bearers carried her flag-draped casket along the aisle in the country’s first state funeral since 1965, when Winston Churchill was afforded the honour. The Queen’s coffin was lowered into the royal vault at Windsor Castle.
Queen Elizabeth II, 96, died peacefully at her Scottish residence of Balmoral Castle on September 8 which marked the start of the state mourning period in the UK, which has seen thousands turn out for an unprecedented queue in London to file past the late monarch’s coffin Lying-in-State.