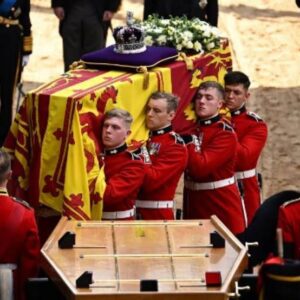 The chimes of the Big Ben fell silent and hymns rang out as the coffin of Queen Elizabeth II was carried into Westminster Abbey here on Monday for the state funeral of Britain’s longest-serving monarch, in the presence of thousands of guests and millions watching on screens worldwide.
In the congregation of around 2,000 made up of world leaders, royalty from the UK and overseas and community leaders, India was represented by President Droupadi Murmu and Foreign Secretary Vinay Kwatra.
The Big Ben, the iconic London landmark housed in the Elizabeth Tower named after the late Queen, tolled every minute 96 times to mark each year of the late sovereign’s life as a procession led by King Charles III entered the historic 11th century Abbey.
The coffin, draped with the Royal Standard, was adorned with flowers from the King’s royal homes and the Instruments of State made up of the diamond-encrusted Imperial State Crown and the orb and sceptre which were gifted to the Queen at her coronation in the same Abbey in 1953.