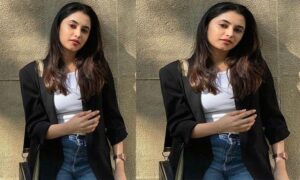 Priyanka Mohan is playing the female lead’s role in Dhanush starree Captain Miller. She took to her Twitter handle to share that she is elated to be part of the project and be paired with Dhanush. She also thanked director Arun Matheswaran and production house Sathya Jyothi Films for the opportunity.Captain Miller is billed as a period drama set in the pre-Independence era of 1930-40. The makers are planning to release the film simultaneously in Tamil, Telugu, and Hindi. It was also recently announced that Sundeep Kishan, a noted actor in Tamil and Telugu, will be playing a major role in the film.