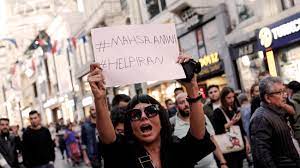 Tehran : There have been running battles between Iranian police and anti-government protesters in Tehran, reports say, in the worst unrest there for years, BBC reported. One person told BBC Persian that her neighbourhood resembled a battlefield.Protests, now in their seventh day, are also continuing in many other cities. Activists say eight protesters were shot dead overnight, while news outlets said two paramilitary personnel were killed.The unrest was sparked by the death of a woman detained by morality police. There are conflicting reports about the number of people who have been killed since the protests began.State media have reported the deaths of 11 people, including security personnel and protesters, but Kurdish human rights groups have said that 15 protesters have died in western Iran alone, BBC reported.Anger erupted after Mahsa Amini, a 22-year-old Kurdish woman from the north-western city of Saqez, died at a hospital in Tehran last Friday following three days in a coma.She was visiting the capital with her family on September 13 when she was arrested by morality police officers, who accused her of violating the law requiring women to cover their hair with a hijab, or headscarf, and their arms and legs with loose clothing. She collapsed after being taken to a detention centre.There are reports that officers hit Amini on the head with a baton and banged her head against one of their vehicles. The police have said there is no evidence of any mistreatment and that she suffered “sudden heart failure”, BBC reported.In an interview with BBC Persian on Wednesday, Amini’s father Amjad said he was not allowed by authorities to see all of her body before she was buried. He said he was only able to see her face, but not the back of her head, as well as her legs, both of which were bruised.Amjad Amini also insisted that his daughter did not have any pre-existing medical condition, as the interior minister has claimed.Many Iranians were enraged by Amini’s death and the first protests took place after her funeral, when women were filmed waving their headscarves in the air and shouting ‘death to the dictator’ – a chant often directed at the Supreme Leader, Ayatollah Ali Khamenei, BBC reported.Similar demonstrations were staged by students at several universities in Tehran, before the protests started spreading rapidly across the country.