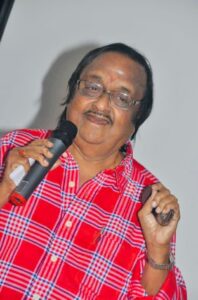 Noted filmmaker,  popular voice in radio advertisements, SV Ramanan passed away at his residence in RA Puram here early this morning due to age-related illness. His last rites would take place later today. Ramanan is survived by wife and two daughters. Son of popular filmmaker K Subrahmanyam, Ramanan started his career as theatre artiste. He had acted in several stage plays. Ramanan was also a documentary filmmaker and helmed several television serials for Doordarshan. Advertisement commercials in his baritone voice in All India Radio are popular even today. From spiritualism to arts and architecture to nationalism, his documentaries are widely acclaimed. His sister Dr Padma Subrahmanyam is a popular classical Bharata Natyam dancer. She is also a research scholar, choreographer, teacher, Indologist and author. His brothers – Abaswaram Ramjhi is a musician and Dr Krishnaswamy is a renowned documentary filmmaker. Young music composer Anirudh is Ramanan’s grandson. Actor Rajinikanth has given voice-over for one of his documentary. Film personalities, television artistes and honchos of advertisement world have condoled the death of Ramanan.