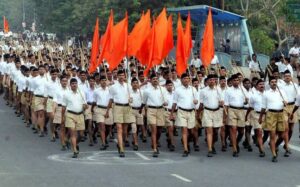 The Tamil Nadu government on Thursday denied permission to the Rashtriya Swayamsevak Sangh (RSS) to take out its route march on October 2 in the state and also declined nod for a counter agitation planned by the Viduthalai Chiruthaigal Katchi (VCK) on the same day.Citing law and order issues due to protests by certain groups in the event of the RSS taking out a route march on Gandhi Jayanthi, the government had conveyed to it not to proceed with its plan, a senior RSS leader said.”Our’s is a peaceful march and the Madras High Court has already granted permission. We will approach the issue legally,” a senior leader told PTI.The RSS had already issued a legal notice to State Home Secretary Phanindra Reddy, DGP C Sylendra Babu and Tiruvallur police inspector seeking to know why contempt proceedings should not be initiated against them for disobeying the court order.The DMK government has also denied permission to allies VCK, CPI and CPI(M) to hold a human chain protest on October 2.