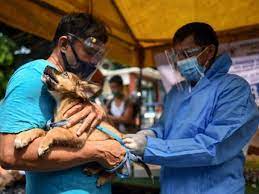 Chennai : As a part of world rabies day celebration HFA in association with Velammal Nexus are conducting a 2 days mega vaccination drive on 28 and 29 September to fulfill the mission by raising awareness regarding the rabies disease, its effects, and how it can be prevented.A press release said that the prince of Arcot, Mohammed Asif Ali will flag-off the drive on 28 September at Velammal Gardens, Mogappair.”The vaccination drive is one of the biggest and most ambitious projects and one of its kind in the city where we would vaccinate a minimum of 1000 stray & abandoned dogs in the city creating a disease free / healthy ecosystem among the strays. The vaccinations include DHPPI (7 in 1), Anti-Rabies, general health check-up and deworming for puppies will be done,” the release added.