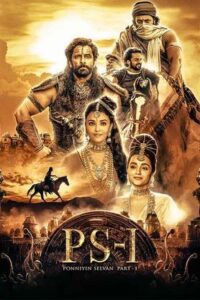 Writer Kalki’s Ponniyn Selvan is not just a novel in this part of the world. But also a pride recollection of Chola empire’s valour and glory. To come out with a movie on Ponniyin Selvan which runs to several thousand pages is tough ask. Many from MGR till Kamal Haasan dreamt of bringing it to big screen. But three cheers to Maniratnam. With writer Jayamohan by his side and a battery of talented artistes and technicians, he has literally pulled it off.
A magnum opus, produced by Lyca on a huge budget, the film brings before our eyes the writings and imagination of Kalki. At no point, Jayamohan tried to deviate from the original and Maniratnam manages to come out with a quality product, which has everything in it to appeal to audience.
The ambitious period-drama has over a dozen characters with equal importance. Jayam Ravi plays Arunmozhi Varman while Vikram is his elder brother Adutha Karikalan, Trisha is Kundavai, Aishwarya Rai is Nandini, Sarath Kumar is Periya Pazhavettaraiyar and the list goes big.
The story revolves around Vandiyathevan, a charming, brave and brilliant young man who sets out across the Chola land to deliver a message from the Crown Prince Aditha Karikalan to the King and the Princess. The story shuttles between Vandiyathevan’s travels in Chola country and the young Prince Arulmozhivarman’s (later known as Raja Raja Chola) travels in Sri Lanka. The narrative deals with attempts by his sister Kundavai to bring back Arulmozhivarman to establish political peace in a land seemingly beset with unrest and civil war plotted by vassals and petty chieftains. There is young and beautiful Nandini who purposely marries Periya Pazhavettaraiyar with a sole aim to topple Chola kingdom.
Jayam Ravi as Arulmozhivarman fits the role to T. Though part one has very little of him, he oozes right spirit and energy. Trisha plays Kundavai, the beauty with brains. Her gorgeous looks adds plenty to the script. Aishwarya Rai as Nandini, who is one of the pivots around whom the movie revolves is apt for the role. Sarathkumar, Parthiban, Prakash Raj, Rahman and Vikram Prabhu have come up with a good show. Aishwarya Lakshmi as boat woman Poonguzhali stands tall. And the scene-stealers are no doubt Vikram and Karthi. With contracting characters, both have given their best. If Karthi is witty, flamboyant and brave, Vikram caught in myriad emotions walks away with all honours. Both come all through leaving a greater impact on audience.
Technically Ponniyin Selvan is several notches ahead of the rest. Visuals are extraordinary thanks to Ravi Varman. So are the BGM by A R Rahman. Though Ponniyin Selvan 1 may lack that fizz, still it is a worthy outing for those who haven’t read the novel and a happy journey to the second part for those who read it.
Tags:Ponniyin Selvan Vikram Jayam Ravi Mani Ratnan