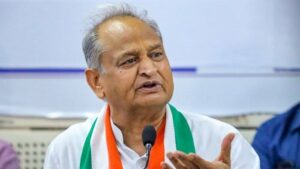 Rajasthan Chief Minister Ashok Gehlot defended his loyalist MLAs who rebelled against Sachin Pilot potentially being the next chief minister of the state. While speaking to reporters on Sunday, Gehlot said he cannot ditch the 102 MLAs who had saved his government during the political crisis in 2020 and, therefore, he apologized to Sonia Gandhi as per a PTI report.
Talking about the MLAs who had revolted against him in 2020, he accused them of colluding with the BJP to bring down the Congress.
Several MLAs loyal to Gehlot, who was seen as the frontrunner for the post of the Congress national president, had last week submitted resignation letters over a possible move to appoint Pilot as the next chief minister.