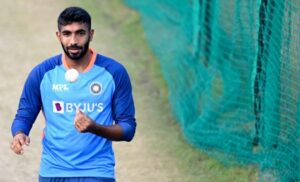 Mumbai : The BCCI president Sourav Ganguly on Friday said that the injured Jasprit Bumrah is still not ruled out of the upcoming T20 World Cup and the clarity on India pacer’s availability for the mega event in Australia will come out in the next two or three days.The 28-year-old was rushed to the National Cricket Academy (NCA) in Bengaluru from Thiruvananthapuram on Wednesday to undergo scans on his back after being ruled out of the ongoing three-match T20I series against South Africa.It has been learnt that Bumrah went for scans and the assessment is underway at the NCA. The initial impression is that the back injury that the India pacer is suffering from is not as serious as it was originally thought to be. Though, there is no guarantee that he will be there for the showpiece event in Australia.

Tags:Bumrah not out of T20 WC yet: Ganguly