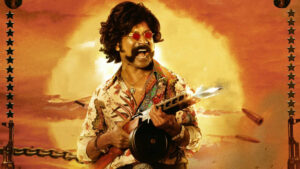 The makers of the Adhik Ravichandran directorial, ‘Mark Antony’, which has actors Vishal and S J Suryah playing the lead, released the gangster look of Suryah from the film on Wednesday.Vishal, who took to Twitter to release the look, tweeted, “Presenting the Gangsta S J Suryah’s terrific look from ‘Mark Antony’. Welcome Jackie Pandian (sic).”Director Adhik Ravichandran also tweeted the first look as he wrote, “Presenting you the first look of S J Suryah sir in ‘Mark Antony’! Jackie Panidan. What an experience each day on sets with you sir. Complete madness and craziness.”‘Mark Antony’ will feature Ritu Verma as the female lead.The big budget film, which is getting made in five languages including Tamil, Telugu, Malayalam and Kannada, is being billed as a pan-Indian film by the unit