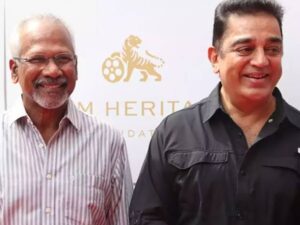 Kamal Haasan will be working with filmmaker Mani Ratnam for his next film. After 35 years of their earlier venture Nay akan, the two come together again. Kamal Haasan, who recently starred in Vikram, shared the news in a post on Twitter, a day ahead of his 68th birthday.
The film will be jointly produced by Udhayanidhi Stalin’s Red Giant Movies, Kamal Haasan’s Raaj Kamal Films International and Mani Ratnam’s Madras Talkies.
The music will be composed by AR Rahman.