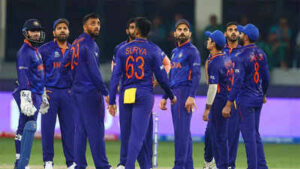 India beat Zimbabwe by 71 runs to top the group, and set up the T20 World Cup semifinal against England.
Rohit Sharma:, Indian skipper, said, It was a good all-round performance, something that we were looking for. Before the game, we were qualified but it was important to come out and play the way we wanted to play. (On SKY) What he’s doing for the team is remarkable. Playing and taking pressure off batsmen as well – it’s quite important from team’s perspective. We know his ability and it allows the other guys to take some time as well. The confidence he shows when he bats, the dug-out can be at ease. He’s shown a lot of composure. This is something that we expect from him and he’s gone from strength to strength. (On the semifinal vs England) The key for us will be to adjust to the conditions as quickly as possible. We’ve played a game there recently but England will be a good challenge for us. They’ve been playing some good cricket. Two teams going at each other, it’ll be a great contest. We don’t want to forget what has got us here, we just need to keep sticking to that and understand what each individual needs to do. It’s going to be a high pressure game. We need to play well. If we do play well there, we have a good game ahead as well. You need to adjust quickly and plan accordingly. They (fans) have been brilliant, coming and watching us. Almost everywhere we’ve gone, we’ve got full house. We expect nothing less in the semifinal. Hats off to them, on behalf of the team I want to thank them.