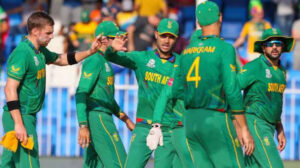 India qualified for the semi-finals before even taking the field against Zimbabwe as South Africa lost their match against the Netherlands by 13 runs. South Africa once again came up with a disappointing performance when it mattered the most, and hence India were guaranteed a semi-final spot. South Africa failed to chase down 159 as they kept on losing wickets at regular intervals. Now, the match between Pakistan and Bangladesh is a knockout, and whosoever wins that contest, they will enter the semi-finals.
Temba Bavuma, South Africa captain, said, ‘ Very disappointing. We really played well before this game. We knew it was a must-win game and again we faltered when it mattered. Hard one to swallow for the guys. We had the confidence and the belief to get to the knockouts. You can pick out a lot of things when you lose that way. Firstly myself with the toss, winning the toss and bowling first. Wasn’t ideal to let them off to a start and let them score 158. With the bat we just got stuck similar to the Pakistan game. We lost wickets at crucial times. The wicket maybe got a bit hard, but they used the dimensions of the ground a lot better than we did. From all of us, just wasn’t good enough.’