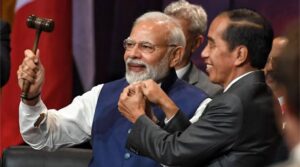 Indonesia on Wednesday handed over the G20 presidency to India for the coming year as the Bali summit of the grouping ended here with the member states finalising the joint declaration.
Indonesian President Joko Widodo handed over the G20 presidency to Prime Minister Narendra Modi, who said taking over the presidency of the grouping is a matter of pride for every citizen in India.
“Together with all countries’ efforts, we can make the G20 summit a catalyst for global welfare,” Modi said.
The handing-over ceremony comes at the conclusion of the two-day G20 summit which ended with the member states finalising the joint declaration.
Foreign Secretary Vinay Kwatra said India had contributed ‘constructively’ to drafting of G20 ‘outcome document’.
The G20 comprises Argentina, Australia, Brazil