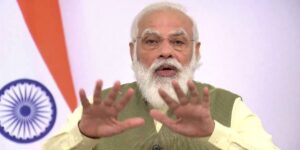 National Investigation Agency (NIA) Director General Dinkar Gupta on Friday said that terrorist activities have declined significantly in the country in the last eight years under the leadership of Prime Minister Narendra Modi. “It’s an honour for me to welcome Prime Minister Narendra Modi. Sir, your zero-tolerance policy to terrorism, the whole of government approach, along with the strong and resolute leadership provided by you has brought about a remarkable change in the security scenario of the country,” NIA DG said while addressing the 3rd Ministerial Conference on Countering Financing of Terrorism. Lauding the Centre’s zero-tolerance policy to terrorism, Dinkar Gupta said, “It has brought a “remarkable change” in the security scenario of the country.” He further emphasized that the policies of the government have cut off financing and other forms of support provided to terror activities. “There has been a significant reduction in terrorist activities in India during the leadership of PM Modi in the last eight years. There has also been a large decrease in the overall economic impact of terrorism in India during this period,” he added. The conference provides a unique platform for participating nations and organizations to deliberate on the effectiveness of the current international regime on Counter Terrorism Financing as well as the steps required to address emerging challenges. Prime Minister Narendra Modi inaugurated the two-day conference and stressed the need to focus on organised crime, stating that “one of the sources of terror funding is organised crime.”