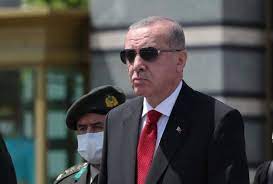 Turkish President Recep Tayyip Erdogan on Monday indicated that he could go beyond air strikes and launch a ground operation in northern Iraq and northern Syria to eliminate the terror threat, according to Anadolu Agency.While talking to the reporters after returning from Qatar to Turkey, Erdogan said, “This is not limited to just an air operation.””As we’ve said before, if someone disturbs our country and lands, we will make them pay the price. So, there are terrorist organizations in our south that are planning many attacks or that carry out such attacks and pose a threat (to Turkiye),” he added.These remarks came after Turkey launched Operation Claw-Sword, a cross-border aerial campaign against the terror group Kurdistan Workers’ Party (PKK)/YPP which has an illegal hideout across Iraq and Syrian borders, reported Anadolu Agency.The Turkish air operation came after last Sunday’s terror attack that rocked Istanbul’s crowded Istiklal Avenue and killed at least six people and left 81 injured.After the attack, Turkish police arrested the suspect who planted the bomb on Istanbul’s Istiklal street.”We consider it to be a terrorist act as a result of an attacker, whom we consider to be a woman, detonating the bomb,” CNN quoted Turkish Vice President Fuat Oktayas saying on Sunday.Turkish Justice Minister Bekir Bozdag said that CCTV footage shows a woman sitting on a bench for more than 40 minutes and then getting up one or two minutes before the explosion, leaving a bag or plastic bag behind.He further informed that earlier, a woman, who was suspected of being involved in the attack, was kept in custody.Bozdag, who made the comments in an interview with privately-owned A Haber news channel, said Turkish security forces believe the woman is the suspect, and officials are investigating her, according to CNN.The Turkish National Defense Ministry said the operation was carried out in line with the right of self-defence under Article 51 of the UN Charter, as per the Anadolu Agency report.Erdogan said nearly 70 aircraft, including armed drones, took part in the operation and added that a total of 89 terror targets, including shelters, bunkers, caves, tunnels, and ammunition depots were destroyed.”At this point, 45 terrorist targets at a depth of approximately 140 km (87 mi) in northern Iraq, and 44 targets at a depth of about 20 km (12 miles) in Syria were hit,” he added.

Tags:Turkish Prez indicates he will go beyond air strokes