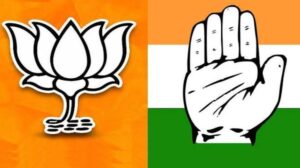 The grand old party may feel elated over retaining the Erode East Assembly constituency to re-establish its hold but in a charged-up political atmosphere, the Congress may not find the February 27 by-poll a cakewalk.
This will be the first bypoll in Tamil Nadu after the DMK-led alliance won the 2021 Assembly polls. Former Congress leader and Tamil Maanila Congress (TMC) founder G K Vasan, whose party candidate was a runner-up in the 2021 Assembly election from this constituency, withdrew from the race in support of the AIADMK putting the BJP in a quandary either to support ally AIADMK or go solo.
AIADMK interim general secretary K Palaniswami, in a deft move, ensured the support of Vasan on Thursday and on the same day communicated to the BJP to extend support for his party candidate in the by-election.
The BJP, which won from Modakkurichi Assembly constituency, which also falls in Erode Lok Sabha seat, is keen on prospering its electoral fortunes at the hustings and also in upsetting the Congress calculation of nominating a strongman replacing Thirumahan Everaa whose sudden demise recently necessitated the by-election. The saffron party has little option but to support the AIADMK or contest alone on its own strength.
Immediately after the election schedule was announced on January 18, the BJP even nominated a poll panel to take up election-related work in the constituency. Indicating that the party desires to contest from Erode East, a senior leader said ”our party member C Saraswathi won from Modakkurichi and this showed the tremendous work our party had carried out to defeat the DMK combine.” ”We may explore several options, some including the technicalities being faced by the AIADMK like the issuance of forms authorising the candidate to contest in the poll,” he said.
For instance, the AIADMK candidate could contest on the Lotus symbol of the BJP, in case the party failed to secure the Two Leaves symbol on account of the tussle between Palaniswami and O Panneerselvam (both former Chief Ministers).
The same symbol cannot be allotted to two candidates nominated by the two AIADMK leaders, he opined.
Tags: