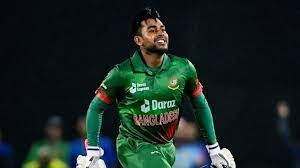 Mehidy Hasan Miraz’s stunning performances throughout 2022 have earned him an all-format Bangaldesh Cricket Board (BCB) contract from January to December 2023. Miraz joined Litton Das, Shakib Al Hasan and Taskin Ahmed in the list of players with all-format contracts, as reported by ESPNcricinfo. Mushfiqur Rahim who announced his retirement from T20I format last year now has a Test and ODI contract while Shoriful Islam has an ODI and T20I contract. The only other players in this group are Tamim Iqbal and Mushfiqur, both of whom have contracts for both Tests and ODIs. Mehidy previously only had a contract for Tests and ODIs, but he excelled in all three formats and was promoted as a result. He played 29 games in all formats, scoring 637 runs at 24.50, and taking 59 wickets at 30.55 with his off-spin. With 330 runs and 24 wickets at 28.20, he was especially productive in ODIs, winning Player of the Series in a match against India in December. Later on in that tour, in the Dhaka Test, he captured a second-innings five-for to push India all the way in pursuit of 145. 13 Test cricketers have received central contracts from the BCB. In addition to Mominul Haque, Taijul Islam, Ebadot Hossain, and Khaled Ahmed, Zakir Hasan received a contract for just the Tests. Najmul Hossain Shanto and Nurul Hasan were elevated to contracts spanning Tests and T20Is, while Mahmudullah was placed on a single-format deal and dropped from T20Is. Among the bunch, Hasan Mahmud and Mosaddek Hossain were the fresh names who received T20I-only contracts.