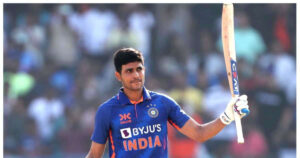 Former Pakistan Cricket Board (PCB) chairman Ramiz Raja showered rich praise on India opener Shubman Gill for his performances in ODIs this year, saying he has got enough potential to succeed and even compared to his opening partner, India captain Rohit Sharma. “Shubman Gill looks like a mini-Rohit Sharma. He has extra time and looks good. He has enough potential. Aggression will also develop with time. He doesn’t need to change anything. He scored a double hundred recently,” said Raja in a video on his Youtube channel. Gill was unbeaten on 40 in India’s successful chase of 109 against New Zealand at Raipur, while Rohit top-scored with an eye-catchy 51. “Batting was easy for India because they have an outstanding batter like Rohit Sharma. He plays exceedingly well. He is an amazing striker of hook-and-pull shots, so a 108-run chase becomes easy,” added Raja, a former Pakistan cricketer. On Saturday, India’s bowlers, led by Mohammed Shami, put up an impressive show to bowl out New Zealand for 108, setting the base for another series victory for the hosts’. Shami (3/18) and Mohammed Siraj found seam movement to run through the New Zealand top and middle order, reducing them to 15/5 at one stage. Though Glenn Phillips, Michael Bracewell and Mitchell Santner played some defiant knocks, they were unable to bail their side out of trouble and the pressure maintained by Hardik Pandya, Shardul Thakur, Washington Sundar and Kuldeep Yadav. “India beat New Zealand at their own game. It was an outstanding bowling performance from them. Their length bowling, seam position was very good. Indian bowlers may not have a lot of pace but their ability to bowl in one spot means that they had a complete performance,” observed Raja. Raja also pointed out how India continued to dominate at home and added that if Pakistan wants to become a better cricketing side, they need to learn from their neighbours on how to be a strong force to reckon with at home. “It’s tough to beat India in