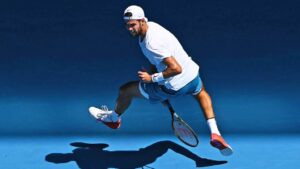 Karen Khachanov stormed into the quarter-finals of ongoing Australian Open on Sunday with a scintillating performance against Yoshihito Nishioka here at John Cain Arena. The 18th-seed Russian defeated the Japanese player 6-0, 6-0, 7-6(4) to reach the last eight at the year’s first major for the first time. The opening 14 games of the match were won by the four-time ATP Tour champion. In the second set, Khachanov took a commanding lead by winning 24 of the 26 points that were played. Nishioka couldn’t help but shake his head. The 27-year-old is renowned for his tenacity and pace, consistently finding new ways to add extra balls to the play and irk his rivals. Nishioka made 23 unforced errors in the first two sets compared to just three winners. “First two sets I didn’t know what was going on, but it’s never easy when you are going with the score too easy. You feel it. Then at one point Yoshi tried to turn it around, he pumped the crowd and it’s normal. I tried to stay focussed all the match from the beginning until the end. But it’s not easy to win with this score, three sets, so the third set it was a really tough one and I’m playing well, so I’m really happy to go through,” ATP.com quoted Khachanov as saying. Later in the day, Sebastian Korda claimed the biggest victory of his career when he overpowered 10th-seeded Hubert Hurkacz in five gripping sets to reach the Australian Open quarter-finals. In a fourth-round showdown No.22 seed Elena Rybakina of Kazakhstan upset World No.1 Iga Swiatek of Poland to make her first Australian Open quarterfinal here at Rod Laver Arena on Sunday. Rybakina produced a sublime game, defeating World No. 1 Swiatek 6-4, 6-4 in a match which lasted for an hour and a half to make her first Australian Open quarterfinal. With an early 2-0 lead, Rybakina demonstrated no qualms about attacking Swiatek’s second serve. However, Swiatek was equally as impressive, scoring second-return po