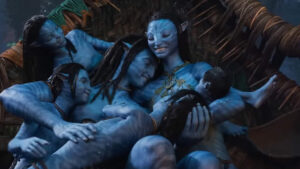 It’s just six weeks since award-winning filmmaker James Cameron’s blockbuster sequel ‘Avatar: The Way of Water’ released and it has surpassed $2 billion in global ticket sales. It’s the sixth film in history – and first in pandemic times – to cross the coveted milestone, joining an exclusive club that includes ‘Avatar’, ‘Avengers: Endgame’, ‘Titanic’, ‘Star Wars: The Force Awakens’, and ‘Avengers: Infinity War’, reports ‘Variety’. Now, Cameron is responsible for three of the six-highest grossing movies of all time. He’s also the only director with three films to cross $2 billion. Notably, Zoe Saldana, who plays Neytiri in the “Avatar” series, has now starred in four of the six films to cross $2 billion. She also appears in both ‘Avengers: Endgame’ and ‘Avengers: Infinity War’, reprising her ‘Guardians of the Galaxy’ role of Gamora. Notably, ‘The Way of Water’ has officially hit the lofty goal that Cameron set for himself prior to the film’s release. Before the sequel opened in theaters, he told GQ that ‘Avatar 2’ represents “the worst business case in movie history” because it needs to become one of the three or four top-grossing movies of all time just to break even. But in the coming days, it’ll take down the fourth- and fifth-biggest movies, ‘Star Wars: The Force Awakens’ ($2.07 billion) and ‘Avengers: Infinity War’ ($2.04 billion), to achieve that feat. The original ‘Avatar’, which debuted in theaters 13 years ago, remains the biggest movie of all time with $2.9 billion. ‘Avengers: Endgame’ trails closely behind in second place with $2.79 billion, while ‘Titanic’ stands as the third-highest grossing release ever with $2.19 billion.