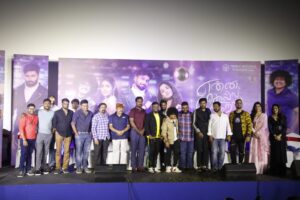 Producer  R Ravindran of Trident Arts is all set to release his upcoming film Enna Solla Pogirai on 24 December.
The movie is directed by A Hariharan and features Ashwin Kumar, Avantika Mishra and Teju Ashwini in the lead roles with Vijay TV fame Pugazh playing an important character. The audio of the movie was launched recently.
Trident Arts R Ravindran said, ‘It’s an emotional and special moment for me as I have got a beautiful team of experts in this project. Enna Solla Pogirai will be a beautiful treat for all the audiences. Why I feel this project so special is because getting a talented actor like Ashwin, two great heroines, top-notch technicians.’
A Hariharan said, ‘When you love and desire for something, the entire universe will come in favour of bringing it to you. Enna Solla Pogirai is one such film that has happened so beautifully in my life. Making a Romance film was my long time, and I  am glad that it was welcomed by Ravindran sir, who is an ardent admired of Romance. Both Vivek and Mervin have made the entire album a great success. Initially, Pugazh’s role was actually meant for Vivek sir, but finally Pugazh came on board, and he has done a great work. Avanthika has done a fabulous job. Before getting Teju Ashwini finalized, we had to go through several considerations and she made us feel that she would be apt one for this role. When I am looking at the fan base of Ashwin Kumar, I am now getting a feel of having made a movie with a superstar. The combination of Ashwin and Pugazh will be more engrossing. Everything in this film was so lovely, and we are bringing the film for release on December 24, 2021. I request everyone to support the movie.’
Hariharan has done a remarkable piece of work with this film. Vivek-Mervin duo has delivered a decorous music for this film. Both the actresses were friendly an supportive throughout the shooting. The film’s output is very colourful and grander, said Ashwin.