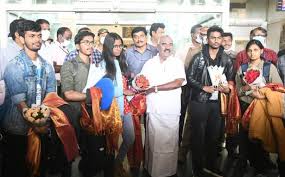 Chennai: More medical students from Tamilnadu, who were stranded in war-torn Ukraine which was bombarded by the Russian military, arrived here under
Operation Ganga launched by the Centre to evacuate the Indians from
that country.

The medicos, Zahir Abubacker and Hariharasudan (both Chennai), Santanu
Boopalan (from Salem), Vaishnavi (Theni) and Selvapirya (Aranthangi),
who arrived to an emotional reception at the airport, were received
by Gingee K S Masthan, Minister of Minorities Welfare, Non-Resident
Tamils Welfare, Refugees and Evacuees and Wakf Board and other officials
with flower bouquets.

It was an emotional moment as the parents of the medicos were moved to
tears on seeing their wards. They also thanked the central and the
state governments for taking steps to ensure the safe return of the
students.

Earlier, the five medicos were repatriated to India by an Air India flight
arranged by the Union government and they reached Delhi.

After they landed in Chennai, the students were sent to their native places by the State government officials.

Talking to reporters, Masthan said due to the efforts taken by Chief
Minister M K Stalin and with the assistance and support of the Union
government the stranded students were evacuated from Ukraine.

He said details in respect of 1,100 Tamils stranded in Ukraine have been
collected and all efforts would be made to ensure safe return of all
Tamils from the war-hit country.

He also said as announced by Stalin, the State government would bear
the entire travel expenses of the students returning from Ukraine.

Tags:arrived here under Operation Ganga launched by the Centre to evacuate the Indians from that country.More medical students from Tamilnaduwho were stranded in war-torn Ukraine which was bombarded by the Russian military