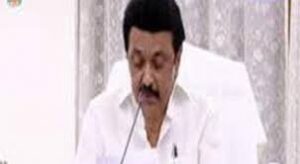 Chennai: Tamilnadu Chief Minister M K Stalin has condoled the death of a woman pilot from the State in an air crash in Telangana.

In a statement here, he expressed deep anguish and grief over the death of
pilot Mahima and offered his condolences to the bereaved family members.

Mahima, a trainee pilot was onboard a single-seat trainer aircraft when it
crashed in an agricultural field near Ramanaguda Thanda in Nalgonda district of Telangana Saturday.