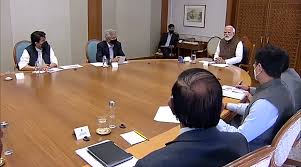 While Jyotiraditya Scindia will travel to Romania and Moldova, Kiren Rijiju will go to Slovakia, Hardeep Singh Puri to Hungary and Gen V K Singh (retd.) to Poland.

According to reports, there is a massive congestion on Ukraine borders with more than 3,000 Indians awaiting to cross the border to Poland via Kyviv-Lupsk axis or Kyviv-Kovel axis. With the Russians unrelenting in pushing the offensive against Ukraine from all sides, the situation at the border is tense as no able bodied Ukrainian is allowed to cross the border to boost the resistance effort.

Thousands of Indian students who were studying in Ukraine have been stuck in the country which was invaded by Russia last week. Many of those students reached the country’s borders with Poland and Romania, but have not been allowed to enter those nations. Several videos of some of those students, asking for help, have emerged on social media.