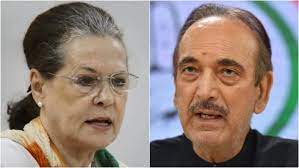 Chennai: In the first contact between the Congress leadership and the dissident G-23 group after the rout in the recently concluded 5-State Assembly polls, party chief Sonia Gandhi is learnt to have spoken to senior leader Ghulam Nabi Azad.

Though reports said a meeting between Sonia and some of the leaders was on the cards, the G-23 leaders said the ‘only way forward’ for the party was to adopt a model of ‘collective and inclusive leadership and decision-making at all levels.’

The leaders, who met at the residence of Ghulam Nabi Azad demanded the Congress initiate a dialogue with ‘like-minded forces to create way for credible alternative for 2024 Lok Sabha polls’.

‘In order to oppose BJP, it is necessary to strengthen the Congress party,’ they also said.