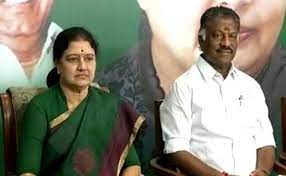 Chennai: Expelled AIADMK supremo V K Sasikala has said no one could change facts, which ‘cannot be suppressed’.

The truth known to God has now come to people’s notice as well through (AIADMK coordinator) O Panneerselvam who deposed before an inquiry panel that he does not have suspicion on the circumstances related to former Chief Minister J Jayalalithaa’s death in 2016, Sasikala said.

She said she did not believe that people had viewed her negatively. It was the ‘handiwork’ of those who did not like her politically. As for the establishment of the inquiry commission, she herself had wanted it because only then facts would be brought out.

‘What was known to God was made known to people too’, Sasikala observed, adding that Panneerselvam had only spoken truth.

On the lack of signals from the AIADMK top leadership to reinduct her into the party while she has been visiting supporters, she said she does not have any regret.