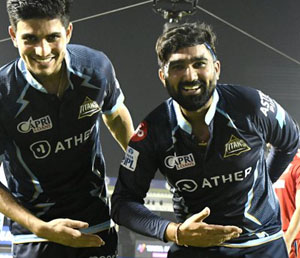 Mumbai : Rahul Tewatia smashed a couple of sixes off the last two deliveries after the talented Shubman Gill’s magnificent 96 off just 59 balls as Gujarat Titans pulled off a dramatic six-wicket win over Punjab Kings in their IPL match here on Friday. Chasing 190 for a win, Gill was out in the 19th over after hitting 11 fours and a six, followed by his captain Hardik Pandya (27) in the final over as the Titans needed 12 runs from the last two balls.

Tewatia (13 not out off 3 balls), who has a reputation of hitting big sixes in crunch situations, sent the last two balls bowled by Odean Smith for maximums to hand the Titans their third win on the trot.

The Punjab side made a brilliant comeback at the death and they were on the verge of a victory only to be denied by Tewatia in a dramatic fashion.

Gill, who had hit 84 in the previous match against Delhi Capitals, was in imperious form as he cut, drove and smacked the Punjab bowlers to hold one end together. He shared 101 runs in 11.2 overs with debutant Sai Sudharsan (35 off 30 balls) to keep the Titans on course in the run chase.

Shubman Gill, MoM, said, ‘It is important to keep the scoreboard ticking. It is important to hit those gaps because this outfield is rapid. It is just about execution. It was just one of those days where I was hitting the ball well and finding the gaps as well. I am hitting the ball hard, trust me. I am doing my level best to hit it hard, it might not look that way. As an opener, I have to bat through the innings, so that it is easier for the big-hitters to hit it in the end. Instead of not thinking in the nets, I try and work and reduce my dot balls as much as possible. Not sure about the celebrations now, it takes us one hour to reach the hotel.’

Hardik Pandya, Winning captain, said, ‘With the kind of ups and downs that happen, I have become neutral. Hats off to Tewatia. It is difficult to go out there and hit, and to do it under this pressure is great. It was Kings’ game, I have sympathy for them. Gill is telling everybody that he is there. A lot of credit goes to Sai as well for that partnership. It kept us in the game. I am going to get better with every game. I am getting tired as I’m not used to bowling four overs. But I’m getting better.’

Mayank Agarwal, said, ‘It was a tough game but we really fought hard. We were 5-7 runs short but we pulled it back after the start they had. There were a lot of positives for us. We did really well to get ourselves to that score after losing so many wickets, so we were very happy with that. We fought really hard on the field. It was great execution by both of them (Rabada and Arshdeep), fantastic effort by them to pull the game, they really got us in the game. Last over could have been anyone’s game. We totally back Odean, it’s fine, he probably had a hard game but that’s fine. We back him a 100%. It’s just a game of cricket, it could be a bitter one to swallow but it’s fine. The talk in the group is we always back the guys. If he has a bad day, he has bad day, no worries, we back him 100%’.

Rahul Tewatia, said, ‘There wasn’t a lot to think in the final over, we just had to hit sixes and that’s what me and David (Miller) were talking about. I knew (on the last-ball six) that it had gone off the middle of the bat, so it would clear the fence. I did premeditate, felt he (Odean) bowl wide outside off to me, premeditated and it executed well for me. The dressing room is really chilled. Ashu Bhai (Nehra), Gary Kirsten and the support staff have done a really good job. We’re just told to execute the plans well and backed well.’