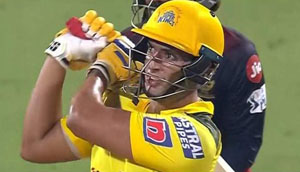 Mumbai : The 2022 edition could well be a breakthrough season for all-rounder Shivam Dube, who feels he is finally able to translate his domestic form into the IPL.

The Chennai Super Kings all-rounder paved the way for his team’s first win of the season with an unbeaten 95 against RCB on Tuesday night.

I am able to do things, which I was trying for a while. The things I was doing in Ranji Trophy, at the domestic level, but after coming to this (IPL) level, you have to come one level up.

So, I was trying to keep the balance, not think much and back myself. I am following my basic game, not doing anything extra. But yes there is one thing, my confidence is high and I am playing well, Dube said at the post-match press conference.

The lanky left-handed batter also maintained that he has been backing his game.

Dube has been an aggressive batter on the domestic circuit but has not been able to replicate that form at the IPL and international level. He has played 13 T20s and an ODI for India with his last appearance coming back in February 2020.

(The team management) has given security and at the same time I back my game. I feel the ball which I can hit, I do that and I am able to connect well, so my confidence is high. I’m trying to play my own game, said the Mumbai batter, who recorded his highest score in the IPL.

Dube and Uthappa shared a 165-run stand the highest for the third wicket in the history of IPL.

The 28-year-old said they had decided to attack the RCB bowlers after a slow start.

We didn’t speak much. The bowlers whom we thought we could attack, sometimes I was hitting, and sometimes he (Uthappa) was hitting.