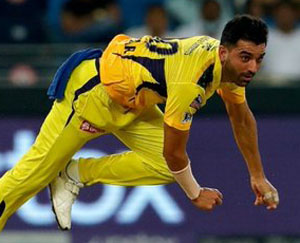 Mumbai : Chennai Super Kings (CSK) pacer Deepak Chahar is at a risk of losing all of his IPL money (Rs 14 Crore) if his long term injury keeps him out for the whole season of the TATA IPL 2022.

Chahar was the second most expensive player in this year’s IPL mega auction which took place in Bengaluru behind Ishan Kishan. He was bought for a whopping amount of 14 Crore rupees by the Chennai Super Kings who decided to buy him back for this season as well.

The pacer has been so highly valued because of his ability to swing the ball in both the directions as well as be useful with the bat in the death overs as well.

Deepak Chahar has been a highly influential bowler for the CSK team over the past 2 years and his absence is already leaving a gap in the Chennai side who has managed to win only a single game in the first 5 games of the season. His return to the side for this IPL season is seen as a doubt because of his recent back injury during his rehabilitation process at the National Cricket Academy (NCA) at Bengaluru.

The level of his injury is still to be assessed and a formal report is still to be sent to the Chennai team by the BCCI. Chahar is in between of a very difficult spell of his career as the 29-year-old had also suffered a quadricep tear during the T20 series against West Indies in February.

The recent back injury could prove to be bad news for the Chennai team considering that both the BCCI and the Indian management team would want the bowler to be at his best as India prepare for the T20 World Cup which is scheduled to begin in October in Australia.

As far as the IPL rules are concerned, the amount at which a player is bought is called his salary which goes into the player’s account. The tax is deducted accordingly as well as per reports by ndtv.in

If a player has a contract of three years, then his per year salary will be given to him for three years which is Rs 14 Crore in Chahar’s case.

The player does get the full amount if he is available for selection during the whole season regardless of the number of matches he plays. This was seen in 2013 when Glenn Maxwell played only three matches for the Mumbai Indians but still got paid in full.