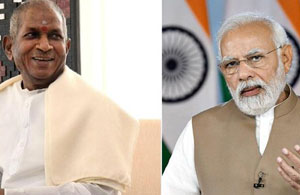 Music composer Ilayaraja has in the foreword of a book drawn parallels between Prime Minister Narendra Modi and Dr. B.R. Ambedkar.

The book was launched on April 14 and the publisher on Twitter said, the book is an academic attempt to bring to the forefront Ambedkar’s vision and work across different domains and how the New India being built by Prime Minister Modi is furthering Ambedkar’s ideals.

Ilayaraja states both dreamt big for India and both are practical men who believe in action rather than mere thought exercises.

The maestro said that Ambedkar would be proud of Narendra Modi for pro women legislation like the anti triple talaq law that his government has brought.

Ilayaraja also mentioned about the ‘Beti Bachao, Beti Padhao’ scheme that is aimed at social transformation and empowering women.