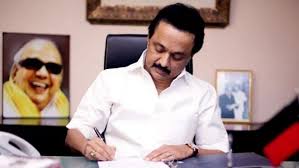 Chennai: Chief Minister M K Stalin today said his government has set a record by providing one lakh free power connections to farmers in less than a year’s time and ensured the participation of equal number of ryots in enhancing the State’s prospects on the farm front.

The State government had allocated Rs 803 crore to the Tangedco to support farmers, who had been awaiting connections for more than a decade, thereby raising the agriculture acreage by 2.13 lakh acres.

The Chief Minister gave away the order to the last identified beneficiary of the one lakh connection scheme, P Kannapillai of Ulundurpet, at an event in TNEB headquarters.

Stalin addressed the beneficiary farmers of five districts through videoconferencing from TANGEDCO’s headquarters in Chennai.

Speaker M Appavu said the Chief Minister will give free power connection to over a lakh farmers every year to clear the entire waiting list.