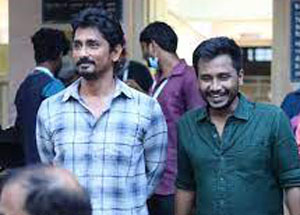 Etaki Entertainment, the production house of actor Siddharth, on Sunday announced that it was next producing a trilingual that was being directed by director S.U. Arun Kumar.

The production house, which chose to make the announcement on the occasion of actor Siddharth’s birthday, said that Siddharth would be a part of the project that had tentatively been titled “Production Number 4”.

In a statement, Etaki Entertainment said that, in the last 10 years, it had stayed true to its goal of creating original content of international quality, while giving opportunities to deserving talents, cing films like Kaadhalil Sodhappuvadhu Yeppadi, Jil Jung Juk and Aval as examples.

Our ambitious new venture will be a trilingual with a Theatrical Release in Tamil, Telugu and Malayalam. We are currently filming at break neck speed on location in Palani, Tamil Nadu, where our story is set, with the blessings of our powerful and kind deity Lord Murugan.

We will be sharing exciting updates soon including Cast and Crew details, our prestigious release partnerships and our final release runway, said Etaki in a statement.