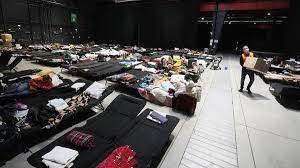 Kiev : With the war in Ukraine approaching eight weeks, more than 5 million people have fled the country since Russian troops invaded on Feb. 24, the U.N. refugee agency reported Wednesday.
After spending weeks with no electricity or water in the basement of her family’s home in Ukraine, Viktoriya Savyichkina made a daring escape from the besieged city of Mariupol with her 9- and 14-year-old daughters.

Their dwelling for now is a huge convention center in Poland’s capital. Savyichkina said she saw a photo of the home in Mariupol destroyed. From a camp bed in a foreign country, the 40-year-old bookeeper thinks about restarting her and her children’s lives from square one.

I don’t even know where we are going, how it will turn out, Savyichkina said. I would like to go home, of course. Maybe here, I will enjoy it in Poland.

With the war in Ukraine approaching eight weeks, more than 5 million people have fled the country since Russian troops invaded on Feb. 24, the U.N. refugee agency reported Wednesday. When the number reached 4 million on March 30, the exodus exceeded the worst-case predictions of the Geneva-based U.N. High Commissioner for Refugees.

The even bigger milestone in Europe’s biggest refugee crisis since World War II was reached as Russia unleashed a full-scale offensive in eastern Ukraine that will disrupt and end more lives.

Ukraine had a pre-war population of 44 million, and UNHCR says the conflict has displaced more than 7 million people within Ukraine along with the 5.03 million who had left as of Wednesday. According to the agency, another 13 million people are believed to be trapped in the war-affected areas of Ukraine.

We’ve seen about a quarter of Ukraine’s population, more than 12 million people in total, have been forced to flee their homes, so this is a staggering amount of people, UNHCR spokesperson Shabia Mantoo told The Associated Press.