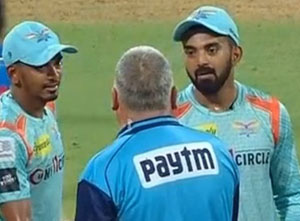 Mumbai : The Lucknow Super Giants have been fined after they maintained a slow over-rate during their Indian Premier League (IPL) 2022 match against Mumbai Indians at the Wankhede Stadium on Sunday.

This was the team’s second offence of the season under the IPL’s code of conduct relating to minimum over-rate offences.

Lucknow Super Giants captain, KL Rahul was fined Rs 24 lakhs and the rest of the members in the playing eleven were fined Rs 6 lakhs or 25 per cent of their match fee, whichever is lower.

Talking about the match – the Lucknow Super Giants (LSG) were back to their winning ways in the Indian Premier League (IPL) 2022 after a comprehensive victory against the Mumbai Indians (MI) by 36 runs.

KL Rahul on Sunday equalled the record of Rohit Sharma for scoring the most centuries by an Indian cricketer in the T20 cricket.

LSG skipper smashed an unbeaten 103 against five-time champions MI to guide his team to a total of 168. This is Rahul’s second century in the IPL 2022 and both have come against the same opponents.

On April 16, Rahul smashed his first unbeaten ton (103) of IPL 2022 against MI. Lucknow won that contest comfortably by 18 runs.